My First Tri Since the DNF

So you DNF your first race. It's depressing, quite a downer, and de-motivates you from continuing. Three years later, when you decide to sign up for another race, you train hard and work your best not to DNF, right? Well... I thought I would. I got panniers so that I could commute to work on my bike. I planned several swims. I trained for CIM and Shamrock'n. No sweat! Except that... I didn't do any of that except the running part. In 2012 and '13, I rode 120 miles, total, 47 of that leading up to the race (and none over 21.7 miles). For swimming, I trained once each in May, June, August, and October, and then once two weeks prior to the race. So training up for IM 70.3? Yeah, didn't do that. But I've learned that I can complete a 70.3, as long as I'm just there to finish. I can't fake it on a full IM.

Oceanside is a beautiful city, and thus, when presented with a place to go and watch a race and a holiday weekend as well, my parents, my sister and her kids, and my whole lot came down to join us for Easter and a race. We had a pleasant holiday the days before the race in Tahoe, and drove down as a family to Oceanside to enjoy the Easter holiday on the beach. Meeting up with the family was a relaxing way to spend the time, and I enjoyed being able to stop by and pick up my bib and gear while the kids of both families spent time playing together. 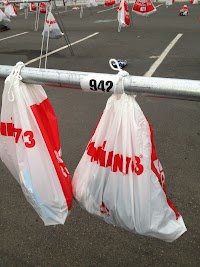 I dropped off the gear the day before, made my way through the vendor area, and grabbed my bib. Having realized on the trip down that I'd forgotten my sunglasses, I took advantage of the sales to buy myself a new pair of Rudy Project sunglasses. We spent the evening with the family, and I prepared to race the next day. Despite having five people crammed into a tiny two-queen room (since one decided to stay with the cousins), and a sub-optimal way of getting ready in the morning (trying not to wake up the kids), I woke up in the morning, hopped on my bike with my gear in hand, and made my way to the swim start.

Being part of a tri club, it's not uncommon to run into fellow members out at a local race. So when the person next to me at swim start at a race hundred of miles from home saw my jersey, and commented that he was a member too, I was shocked. It was great having a fellow club member, Silas Bauer, at the race with me. As we prepared for the start, it gave me a great opportunity to chat, and stay centered as the moment for the start arrived.

When I swam in IM Arizona, I realized that most of my training meant little. By that, I mean that within a few hundred meters, any speed or agility had been depleted, and I was left with Dory's mantra. For half the distance, it still felt the same way. I hadn't trained this time, so the initial energy reserves lasted a bit less, but the same general feel of "just keep swimming" was present through the forty-odd minutes of swimming. The swim start was pleasant enough, and the course meandered out into the bay, then back towards the beginning in somewhat of an L shape, but I'm not a super strong swimmer. Folks continued to pass me all swim long, and I just keep going and going. 1.2 miles isn't very far, especially compared to my previous 2.4. I felt strong enough coming out of the swim, and was happy to get out of my wetsuit and move on to the second stage of the race.

Camp Pendleton, aka the Bike

I was probably most excited about the improvement of the bike course for this race versus Arizona. In Arizona, it's a long, straight stretch, there and back, with multiple laps. For Oceanside, the route goes up the coast, wanders through the mountains, and heads back into town in one long loop. The area was beautiful, even if there were posted marines all through the course (you are on a base through half of it!), and the change in scenery and altitudes was fantastic.

I in no way worked hard. 14.5 mph is a pace I can keep up near indefinitely, and I knew my biking wasn't strong, so I didn't push myself at all. My goal was to stay healthy, keep moving, get enough fuel (six honey stingers), and make it out to my strong sport. I definitely met that goal. I used my action cam to record the bike, though only captured the first twenty minutes. If you want to see me get passed by loads of riders, you can check it out on YouTube.

Sub 9s was way better than I expected. As I mentioned in the intro, running was the only sport I really trained on in the previous year, so saving up enough energy by taking it easy on the bike (and getting passed constantly), meant that my run consisted of non-stop passing of other athletes. It's a great feeling to spend two hours running past person after person. I never slowed, I had plenty of energy (though I was tired), and I kept booking it till the end. Being in the slowest of 10% of the riders was definitely balanced by being in the top half of the runners. It was a great way to finish the race, and it was a blast getting to run by the family who were busy playing at the beach during my run. D and my parents were able to catch me on the run as I went by, and D even made it to the finish for me crossing the finish line. The feeling of completing the race after my last let down was great, and I'm glad to have come back to the sport without a DNF. Next time, though , I'll definitely need to train more. 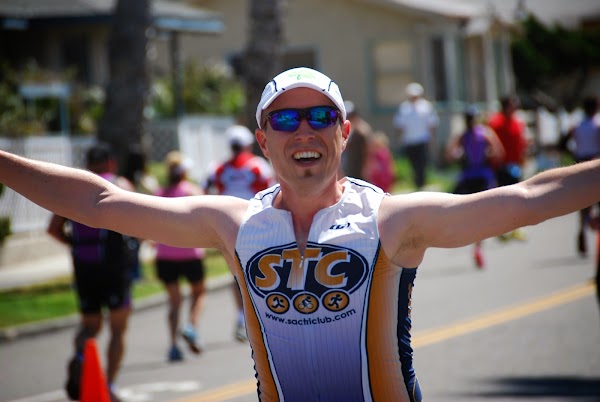